THE State Government has been accused of ignoring a lucrative tourism sector.
In 2007, the Department of Premier and Cabinet invested an undisclosed sum in preparing an Aboriginal tourism development plan.

But more than two years later, Tasmanian Aboriginal Land and Sea Council board member Hank Horton says none of the plan has been implemented and his pleas to successive Tourism Ministers have been ignored.

``In the past 18 months I have made three formal requests for a meeting with the Minister,'' said Mr Horton, who is also an indigenous tourism consultant.

``The last letter, in 2008, said the Minister would respond later but I haven't heard a thing.''

Mr Horton said the potential for indigenous tourism was huge and his community feared non-Aboriginal operators would start capitalising on it.

He said there were only two true indigenous tour operators in Tasmania -- himself and Tiagarra at Devonport -- although others claimed to offer authentic experiences.

Aboriginal tourism is defined as experiences or things that are owned by Aborigines, where they benefit by gaining employment and income and which provide consensual contact with Aboriginal people, cultural heritage or land.

Mr Horton said it was both a blessing and a curse that Tasmanian indigenous tourism was in its infancy.

``It is a curse because we can't meet the demand for indigenous tourism,'' he said.

``At peak times, I have five times the work I am able to do but it is also a blessing because it gives us the opportunity to do it right.

``The current lack of experiences means our sites haven't been promoted and people don't have a preconception about what they can do.

``That means we won't have battles about appropriate use of sensitive sites like the current controversy over whether tourists should climb Uluru.''

Tasmanian Aboriginal Land Council chairman Clyde Mansell said: ``Implementation of the plan has stalled.
``A lot has been the inability of Tourism Tasmania to drive it but the Aboriginal community hasn't necessarily been pushing for it.

``The important thing is that until we can bridge the gap between the demand for indigenous tourism and my community's ability to deliver it, we need protocols to ensure visitors are getting the authentic interpretations.

``The plan should have delivered that by now.''
Mr Horton said there would be no progress until an Aboriginal tourism body was formed.
Tourism Minister Michelle O'Byrne said Aboriginal tourism in Tasmania was at an early stage of development.
``We have very few commercial experiences in Tasmania in this area and we need to move ahead carefully,'' she said. ``I'm confident Aboriginal heritage can become an increasing part of the state tourism experience.''
PAYS TO BE POPULAR
* Domestic indigenous tourism visitors spend more per trip than other visitors ($1570 compared with $627).
* They stay longer (11 nights compared with four). 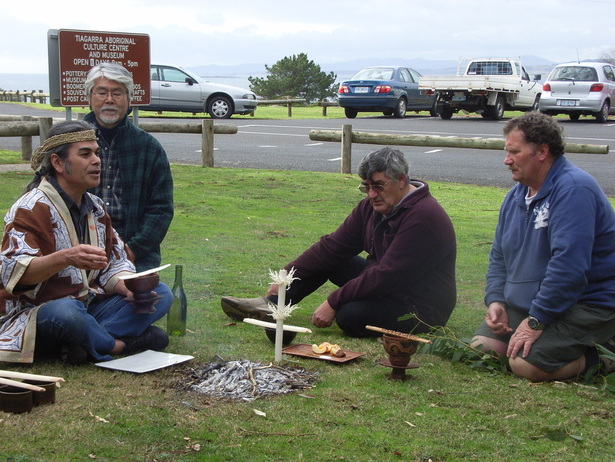 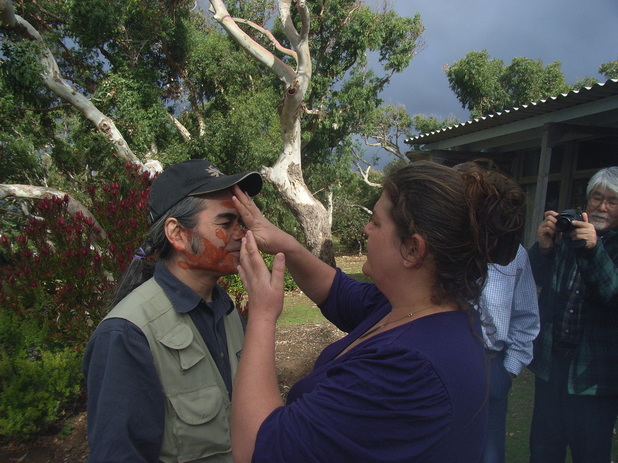 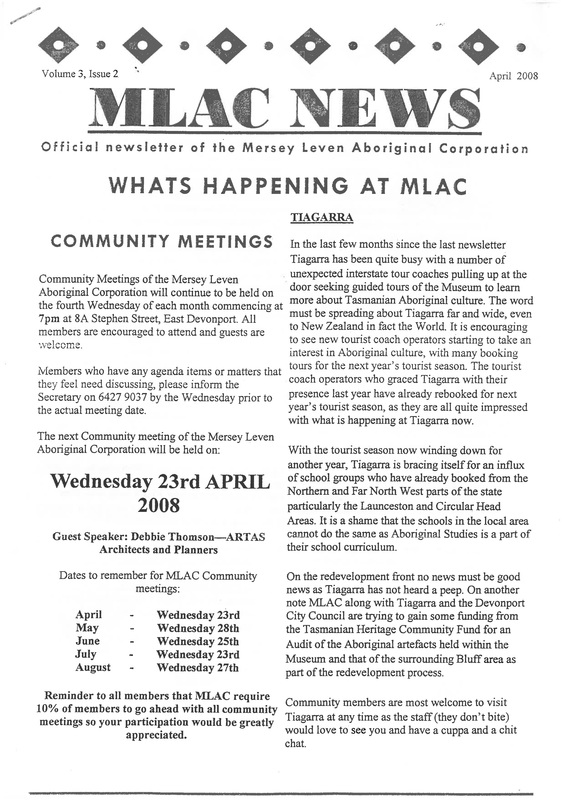 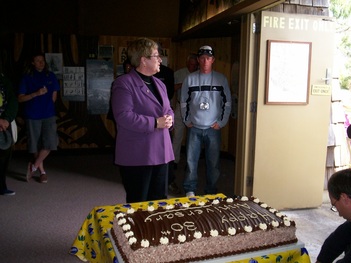 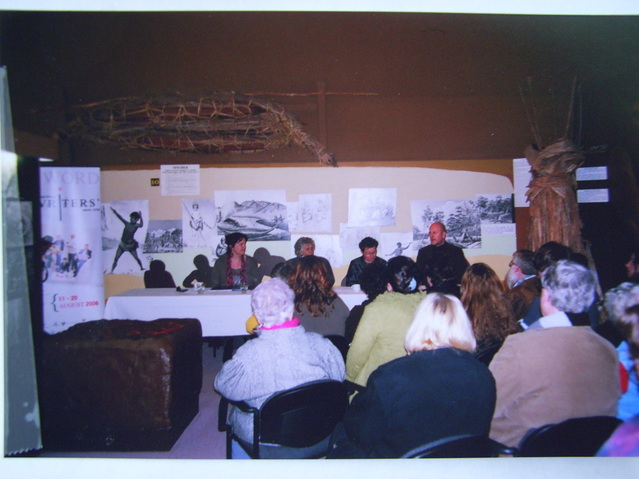 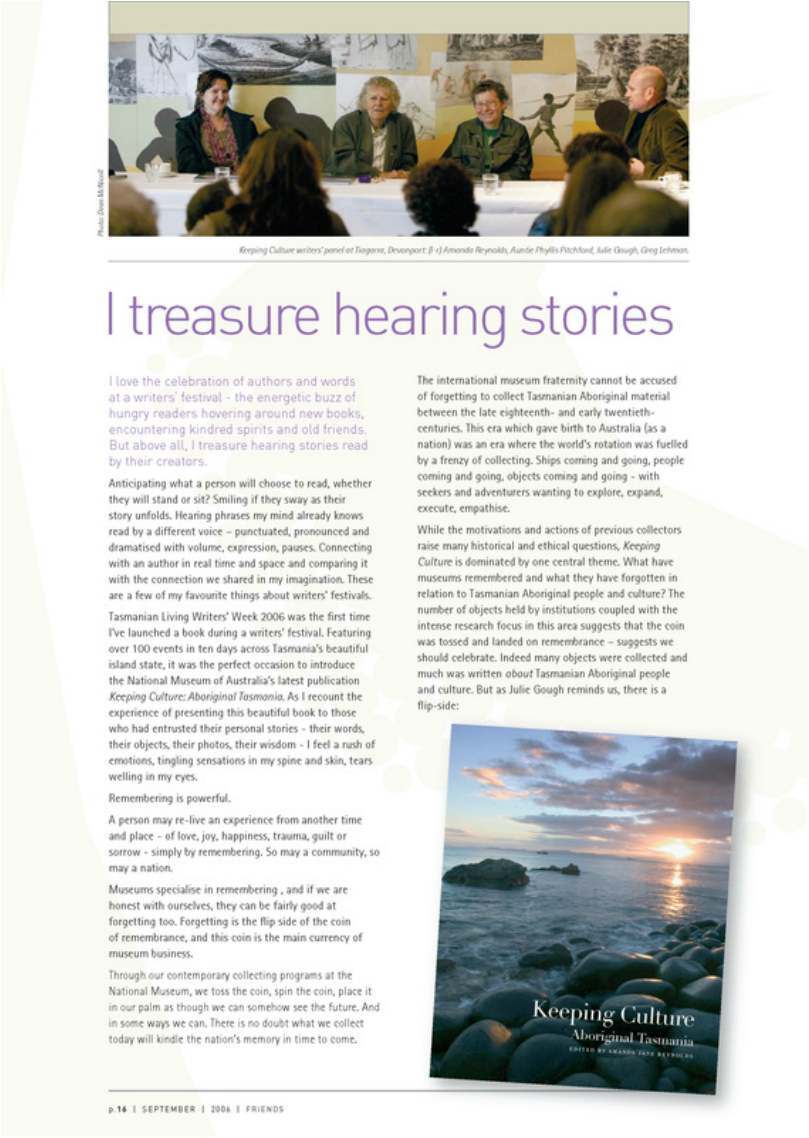 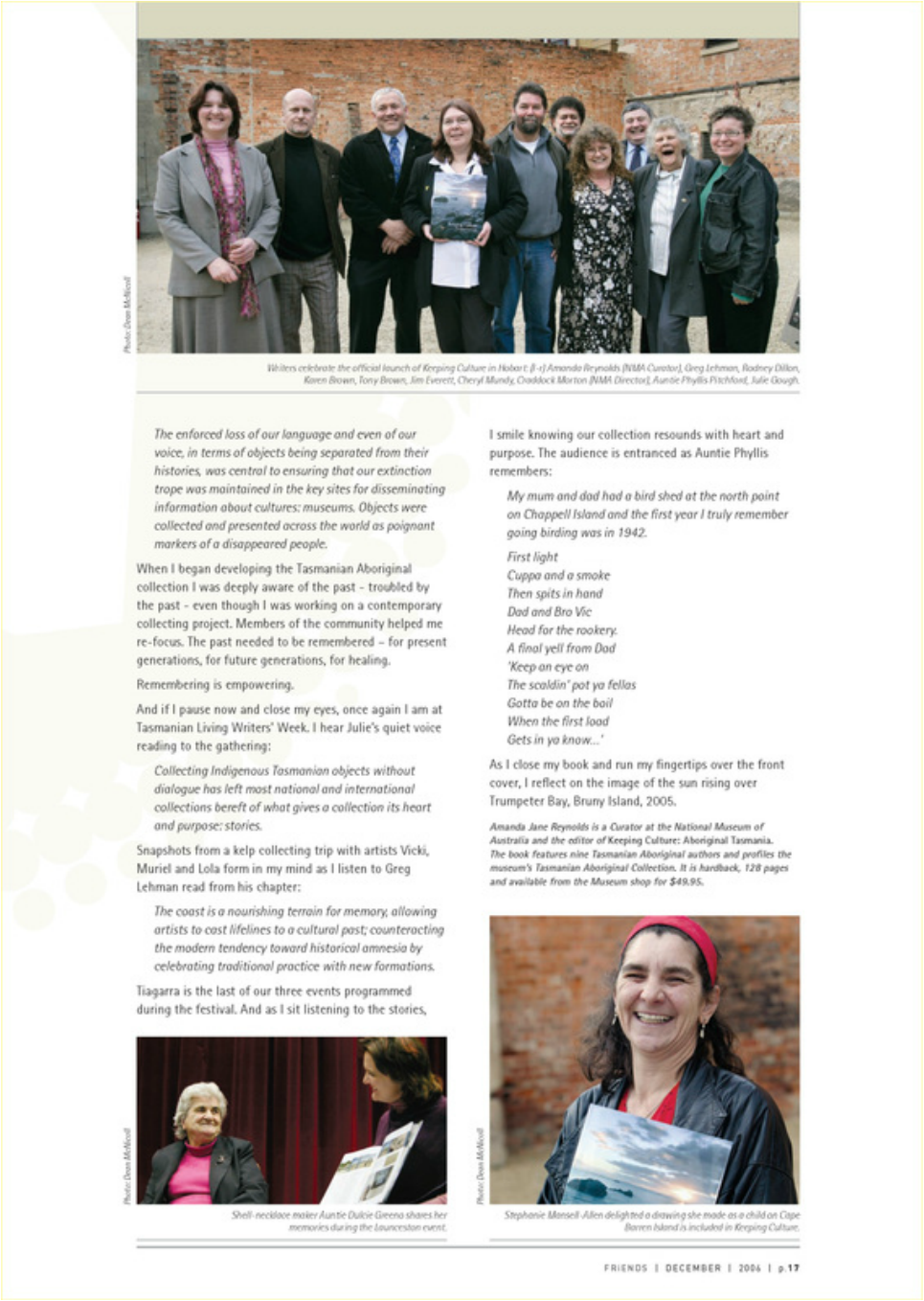 MOVE over artists, now it's time for the writers to have a go.

Author and festival co-ordinator David Owen said yesterday almost 150 events were planned during the week which runs from August 11 to 20.

``There will be plenty of opportunities for people to get involved and enjoy themselves,'' Mr Owen said.

``There is great variety and most of the events, half of which have been devised by local communities, are free.''

The festival's official launch will be held at the Tasmanian Museum and Arts Gallery on Friday, August 11 at noon.

This event will also see the launch of a landmark National Museum of Australia publication Keeping Culture: Aboriginal Tasmania.

Nine writers have contributed to the publication

including former ATSIC commissioner Rodney Dillon and poet and playwright Jim Everett who has 30 years' formal involvement in the Aboriginal struggle.

Newnham campus on Saturday, August 12 at noon and at the Tiagarra Aboriginal Culture Centre and Museum at Devonport on Sunday, August 13 at 11 am.

Several other books will be launched during the week.

A highlight of the festival will be the first-ever Tasmanian book fair, to be held in the atrium of Hobart Henry Jones Art Hotel on Sunday, August 13.

Up to 300 Tasmanian titles will be available for purchase, and many authors will be present to sign books.