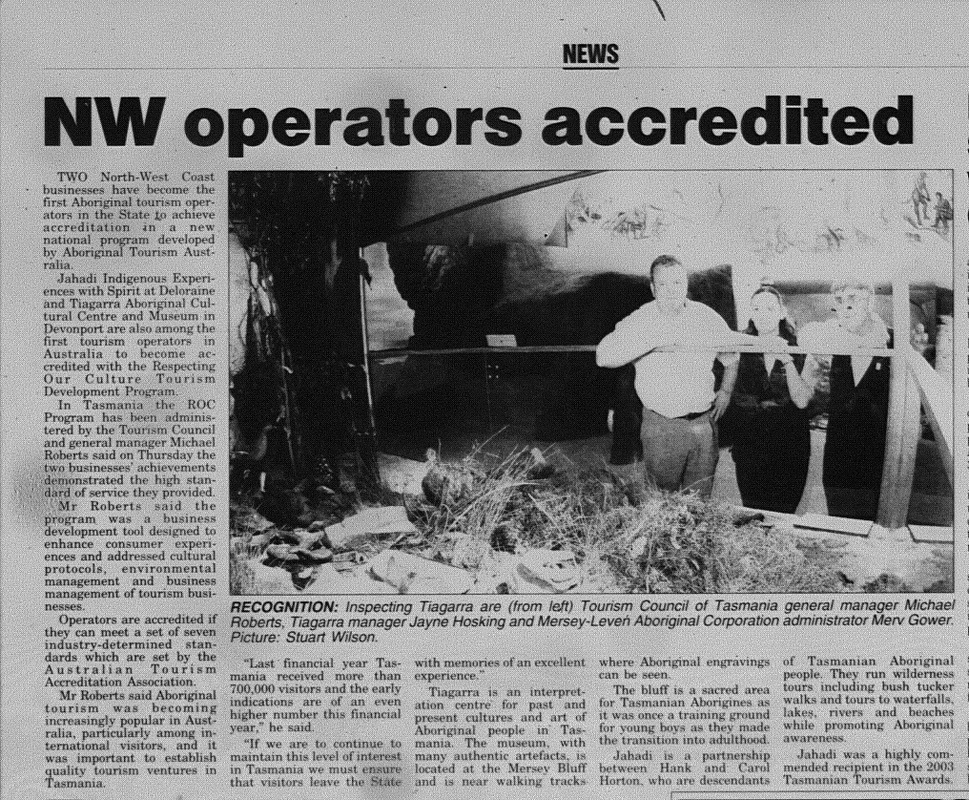 17/4/03
D.Roath Fisenge       Germany
A bit old fashioned, needs to be updated! But good to have such an expo to make people sensitive to what they have done.

19/05/03
Matt Turner    Eden-Hills     S. Australia
As others here have commented the displays are very interesting and would have been “modern” back in the 70’s. It is very disappointing that some upgrading of the displays and updating of the text has not occurred. Why is this so? There is so much here therefore worthwhile updating. Is the explanation for this the Organisation “Tiagarra” or (more likely) no money coming from local and state government.

04/02/02
Alison Sayer-Jones Parkvale Victoria
Disappointing that what should be a wonderful resource, is not. It doesn’t appear to have been updated since the 70’s is outdated in the condescending manner it occasionally uses in regard to aboriginal culture etc.

17/12/02
E Fernandez    ACT
Great that it is here. Greater that Aboriginal people have finally become involved in its existence. I feel that some of the language used such as “halfcast” and “vanished race” should be explained as how backward it is today and rather offensive to some people. But pleased that Tiagarra is here  “thanks” 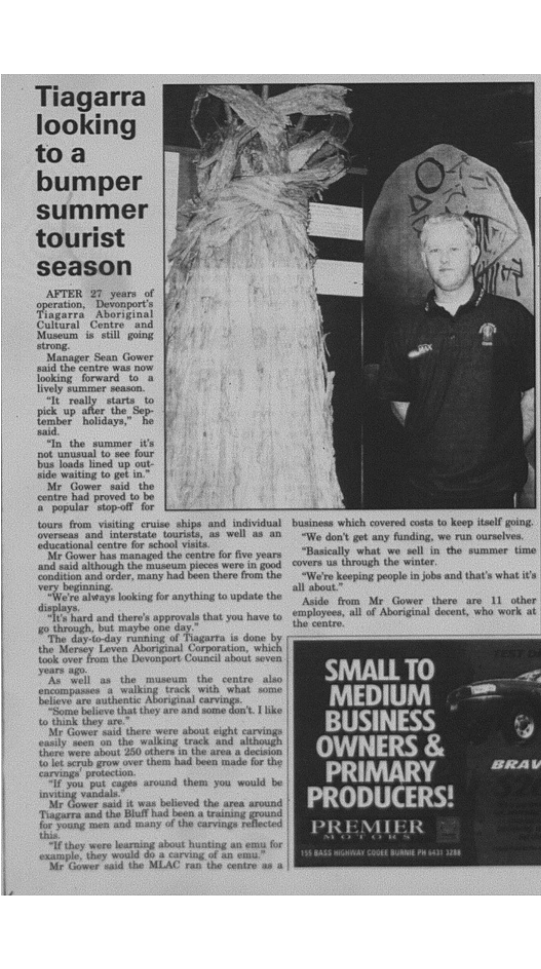 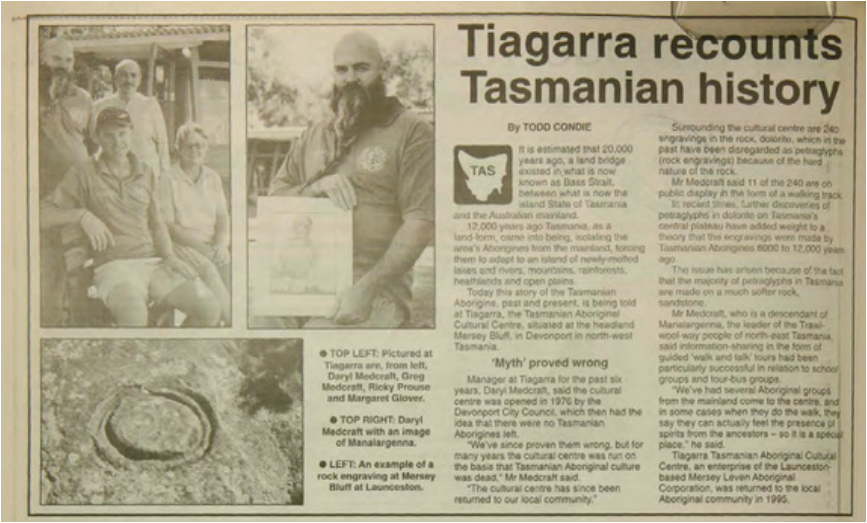 Tiagarra Aboriginal Cultural Centre and Museum
Tiagarra Aboriginal Cultural Centre and Museum is at Mersey Bluff near Devonport in Tasmania. Mersey Bluff is the site of ancient and precious rock art. It has attracted tourists for years, and continues to be very popular.
The Centre was built by the Devonport City Council in 1976. A visiting UNESCO expert advised that the site had international importance and should be protected.
The Mersey Leven Aboriginal Corporation formed in 1991. The local Aboriginal people lobbied to re-establish their relationship with the site and operate the Centre. They put a lot of effort into negotiating, networking, and writing letters and funding applications. They studied the tourist trade and business and finance management.
Devonport City Council granted the Mersey Leven Aboriginal Corporation a 20 year lease on Tiagarra on 6 June 1995. DEETYA provided funding for on-the-job training and ATSIC also gave financial support. This funding has helped to make Tiagarra more commercially viable.
Devonport Council continues to support the Centre and Museum by maintaining the buildings, and fitting a gas heater and new roof. They are helping with other infrastructure. They have also promised to underwrite losses for a specified period.
Devonport City Council's decision to hand over Tiagarra to the Mersey Leven Corporation has strengthened relationships between the Aboriginal and non-Aboriginal people of the area.
Tiagarra is a cultural heritage business that provides jobs. It has given the local Aboriginal people pride in their history and culture, and confidence in sharing it with visitors. They have control of their ancient art site and now provide a more rich experience for visitors.
Source:
Australian Reconciliation Convention (1997) State/Territory Award Certificate
Tiagarra Aboriginal Culture Centre and Museum (TAS)- respecting antiquity [Online] Available: http://www.austlii.edu.au/au/other/IndigLRes (17 Oct. 2001)
url:  https://www.dlsweb.rmit.edu.au/toolbox/Indigenous/ecotourismtoolbox/topic_ts/ts_bi02_read04.htm

THE Olympic flame burned in a deck-mounted cauldron as Tasmania's Bass Strait ferry spirited it back to Victoria.
It was carried aboard TT-Line's Spirit of Tasmania about 3pm yesterday after completing its five-day 842km journey around the island state.
The vessel left at 4.10pm after the last of the state's 479 torch-bearers -- Devonport's 1999 under-17 Australian teams pursuit cycling champion Jarrod Burr -- lit the cauldron.
The flame will arrive in Melbourne at 8.30am today.
A flotilla of yachts trailed the vessel while cars parked overlooking the city's Mersey River tooted their horns.
People waved as the flame could be seen burning brightly in the cauldron.
The torch travelled 119.6km from Launceston's Cataract Gorge to East Devonport's Spirit terminal yesterday.
It passed through the townships of Hadspen, Carrick, Hagley, Deloraine, Latrobe and Spreyton where locals turned out to cheer it on.
The flame also passed before representatives of the state's indigenous community, the final act of an Aboriginal welcoming ceremony held on Tuesday's arrival.
Circular Head Aboriginal elder Joy Gillies said: ``Our ancestors are buried around here.
``I'd like their spirits to be alive and under that flame for all sports men and women.''
Mrs Gillies was joined by elders from the Devonport Aboriginal community and about 20 indigenous people.
The flame met them at Tiagarra, or "the keeping place'', a promontory at the port city's centre featuring ancient indigenous rock carvings. ``I believe that the flame has gone around and its spirit has gathered the momentum of our state to take to Sydney,'' Mrs Gillies said. ``My spirit will definitely be with Cathy Freeman and all other Aboriginal athletes.''
She said the passage of the flame marked an outpouring of community spirit and was also an ``excellent step towards reconciliation''. ``[The flame] started off at Uluru, it is acknowledging the first people,'' Mrs Gillies said.
``It is very significant.''